END_OF_DOCUMENT_TOKEN_TO_BE_REPLACED

Auckland IT Salaries: Top 5 Salaries for 2017 – What Does the Future Hold?
Posted by Josh Halligan on 16th February 2018 Share: 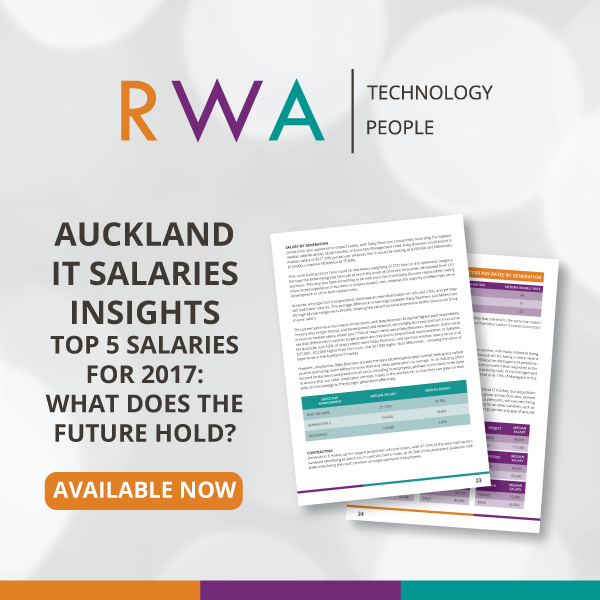 Last year, we put out the inaugural Auckland IT Salaries Report, which took a look at tech sector salaries in the Auckland area. Over 2,000 respondents shared data with us as part of our Auckland IT Salaries survey, from which we were then able to draw a number of insights from for the report. With the 2018 Auckland IT Salaries Survey in full swing, we thought it’d be a great time to have a look back at the top five highest paid roles from last year (excluding executive roles), examine why they came in so strong and consider what the future holds for these roles in a booming IT sector.

2017 was a big year for projects, with many large employers embracing the latest developments in the IT sector (for example, AI and machine learning), and driving change throughout their business. This naturally required people to lead and direct these projects, with success contingent on solid planning as well as solid execution – hence a strong demand for Programme Managers and Directors. With change still ongoing through 2018, we don’t expect this demand to let up.

Last year saw a swathe of security breaches hit the headlines, with everyone from Deloitte to Uber being caught up in a variety of hacking scandals. With security concerns front of mind for many businesses, it’s no surprise that Security Specialists were in high demand last year. In the wake of a turbulent 2017, we can’t see companies lessening their focus on security long-term, so we expect further growth in this area.

The role of Infrastructure Architect is often a forgotten one in the IT sector, in lieu of what are sometimes seen as more ‘glamorous’ roles in the Development or Project spaces. However, it’s often because of these systems stalwarts that our networks, work, and that’s why they’re worth the third highest salary in the Auckland IT sector. In a world that’s forever embracing more devices, and with the Internet of Things quickly becoming a reality, Infrastructure professionals are only going to become more critical to continued industry growth.

Project Manager is always a role that we see a strong demand for, and 2017 was no different. Like we mentioned in regard to Programme Managers/Directors, last year was a strong year for projects, so it’s no surprise that Project Managers cracked the top five when it came to salary.

While our prediction is that the above roles will continue to be in demand as we enter what looks to be another project-heavy year, we’ve also seen companies taking a strong mandate when it comes to hiring Developers. This is more than likely a space to watch for 2018.

We’re currently conducting the 2018 Auckland IT Salary Survey, with a view to putting out a new and updated report later in the year. Have your say on industry salary trends, job satisfaction, and find out how your pay compares to your peers’ by taking the survey now.